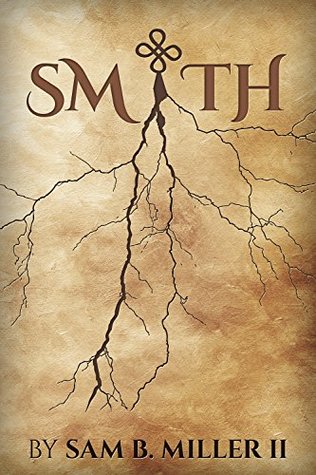 Smith by Sam B. Miller II

Jake’s Father is an archeologist who is in Israel to complete a dig on King Solomon’s Temple. As an eighteen-year-old American, Jake is unwelcome by the people in the territory. Defending himself against the townspeople is a constant torment.
Through a map Jake finds on his Father’s desk, he and his friend Avner decide to explore a newly discovered chamber. At the end of a dark and deserted tunnel, Jake uncovers the treasure of King Solomon’s Power ring. He puts it on his finger and feels his life changing.
Jake passes off the ring as a replica, but he starts to hear a voice that belongs to Smith. Smith provides him guidance on how to deal with his newfound powers. Jake wants to learn all he can about his new secret ring. Smith encourages him to sharpen his fighting skills by joining the Army.
Is Smith leading Jake to a newfound life where he can become a hero? Or will the decision to join the military endanger his life? Will Jake find out the ring he wears is good or will it be of evil intent? And who keeps trying to steal the ring?

I was sent a copy of this book by the author in exchange for an honest review. Big thanks to Sam B. Miller!

Unfortunately, and I hate to bring you a negative review, I did not enjoy this book. I won’t be finishing it, as I see no point in forcing myself to read something I don’t like.

The premise was cool, and since I’m a history student – and obsessed with ancient history -, I thought this book would be right up my alley. It takes place in Israel, where our American main character, Jake, is currently living. He accidentally finds King Solomon’s ring, named Smith, and later realizes that the ring speaks to him. Then, he starts making decisions based on what Smith tells him to do – such as joining the Army.

It kind of reminded me of Rick Riordan’s books, which I also didn’t finish 😅 I had read the synopsis before going into this book, in which we are told that Jake is 18 years old. However, the whole time I felt like this was a middle-grade novel narrated by a 13 or 14-year-old. I only realized that wasn’t the case when I eventually thought “Wait, how old is he if he is joining the Army?”. So I really didn’t enjoy that, the main character is rather childish for his age.

I wasn’t a fan of the cast of characters either, which sucks because I usually read books for the characters. If a book has a terrible plot but it features characters that I like, I’ll probably still enjoy it. If it’s the other way around, it’s much harder for me to like it…

Unlike I had expected, the whole plot was not of my liking either, so I started losing interest as I read and, eventually, gave up. I think it’s a matter of age. Maybe I’m too old for this shit? We have to recognize it when a book is not right for us, right?

Well, that’s about it regarding what I actually read. I’m really bummed that I didn’t like this book, but such is life. Apparently, a lot of people give it 4 and 5-star ratings on Goodreads, so it can’t be a terrible book – it just wasn’t to my liking!

Have you read Smith? Did you like it? Let me know in the comments! ♡

I hope you enjoyed reading my thoughts on Smith and if you’d like, check out my other book reviews!

Thank you so much for reading,
I’ll see you in my next post ♡